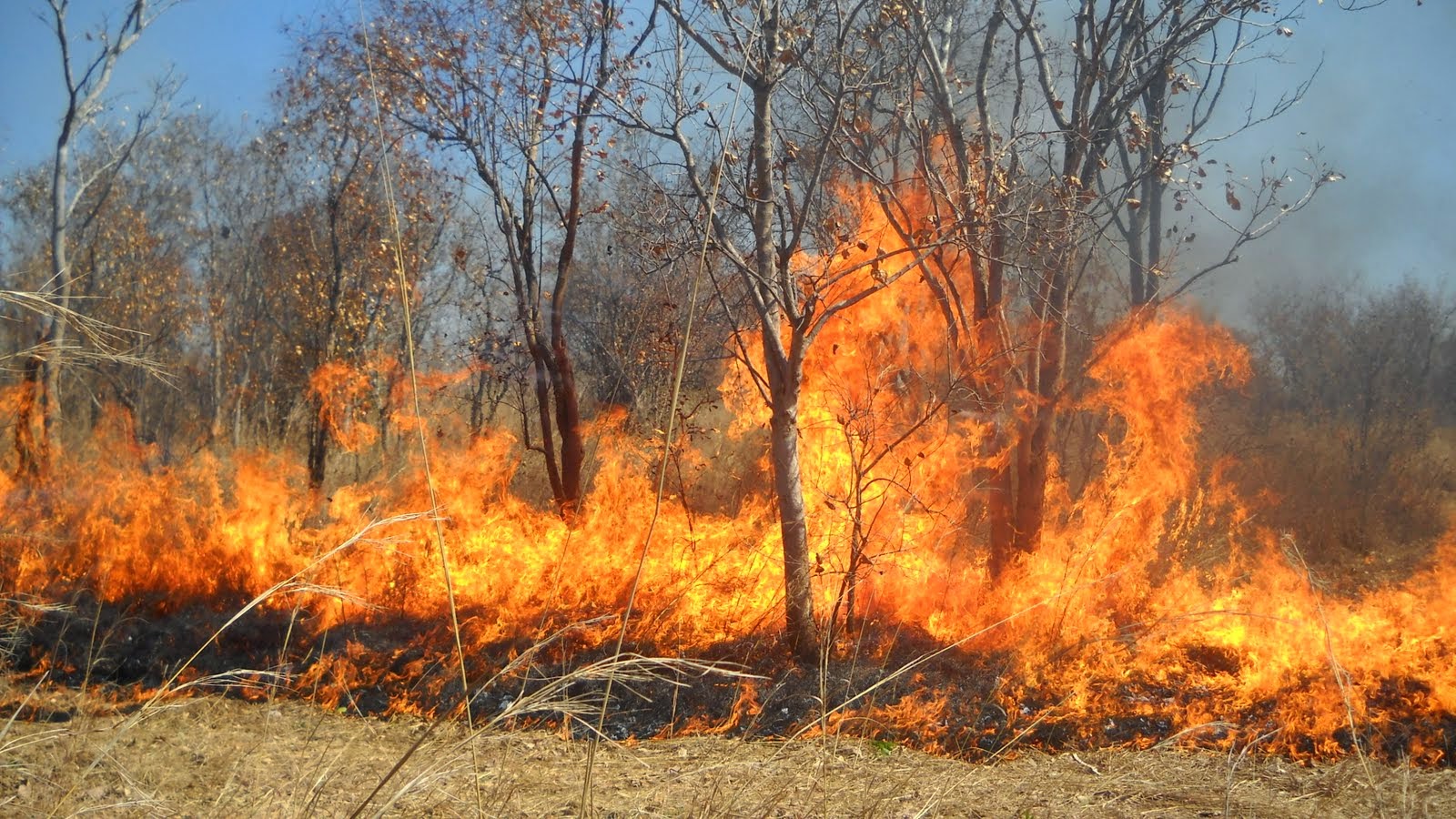 ​
Forest fire causes imbalances in nature and endangers biodiversity by reducing fauna and floral wealth. Traditional methods of fire prevention are not proving effective and it is now essential to raise public awareness on the matter, particularly among those people who live close to or in forested areas.

CAUSES OF FOREST FIRE
Traditionally Indian forests have been affected by fires. The menace has been aggravated with rising human and cattle population and the consequent increase in demand for forest products by individuals and communities. Causes of forest fires can be divided into two broad categories: environmental (which are beyond control) and human related (which are controllable).

1. Environmental causes are largely related to climatic conditions such as temperature, wind speed and direction, level of moisture in soil and atmosphere and duration of dry spells. Other natural causes are the friction of bamboos swaying due to high wind velocity and rolling stones that result in sparks setting off fires in highly inflammable leaf litter on the forest floor.

2. Human related causes result from human activity as well as methods of forest management.  These can be intentional or unintentional, for example

• The centuries old practice of shifting cultivation (especially in the North-Eastern region of India and in parts of the States of Orissa and Andhra Pradesh).

• the use of fires by villagers to ward off wild animals

• fires lit intentionally by people living around forests for recreation

The causes of forest fire have been increasing rapidly. The problem has been accentuated by the growing human and cattle population. People enter forests ever more frequently to graze cattle, collect fuel wood, timber and other minor forest produce. It has been estimated that 90% of forest fires in India are man-made.

Fires are a major cause of forest degradation and have wide ranging adverse ecological, economic and social impacts, including:

​ As responsible trekkers and nature lovers, we should work towards saving our flora and fauna from wildfire. To start with, we plan to work with kogar range of Sharavathi wildlife sanctuary. Idea is to audit the preparedness for wildfire eventuality by department.   ​

Fallowing is the Itinerary planned.
3-4-2015
4-4-2015
5-4-2015
Cost : Cost will be around Rs.1500/head. This includes food, stay, water sports activities and travel.
Please check photos of last month volunteer work on muppane clean up activities

"Save Water, Save Energy and Save Earth for our next Generation"
Posted by Unknown at 11:33 PM 3 comments:

Cleanliness is Godliness...so said Mahatma Gandhi. In our country, people give least preference to cleanliness.Due to which, we have lots of infectious diseases spread among people which is avoidable with proper sanitation and hygiene. In India, After mahatma gandhi, only our current PM has given so much importance cleanliness. Little responsible public behavior from general public will go long way in achieving disease free, clean India.

Eco tourism can act as boon to forest conservation, in terms of monitory resource mobilization and volunteer mobilization. Our forests are under staffed,monitory support is majorly by govt budgetary allocation. Because of these, Its challenging task today to conserve our pristine forests.

But Eco tourism can also act as bane, if not managed properly. Our general public apathy towards clean public places has not left forests too. Our govt has declared tourism spots in forests all over for the benefit of general public. People who visit such places have scant respect for the hygiene and throw paper plates, water bottles and other type of (!)  bottles.,.One place, victim of such brazen apathy of tourists is Muppane Nature Camp.

Muppane nature camp has been setup by forest departments wildlife wing to be used by nature lovers for nature study,research and for over night camping. But alas, it has been used for partying by powerful ruling class. We have no complaint on that, but the way they treat this place is paining to any nature lover. They abuse the place in every possible way. This abuse causes serious hazard to wildlife in the forest.

Most of the time this kind of abuse happens right under the nose of insensitive officers.Luckily this time around we have a wonderful RFO, Mr.Srinivas Naik manning the Kargal range. Mr. Naik is MSc, forestry from prestigious agriculture university. A dynamic officer with sound knowledge on various flora/fauna and real love for wildlife. Ever since he took over kargal range, he has been asking me to make this nature camp activities more meaningful. We discussed various ways to make these camps meaningful. We decided to have one workshop in every quarter, which will have knowledge sharing among campers and also to create awareness on various forest issues among general public.

To begin with, we decided to have a "swatcha bharath(clean india)" program at Muppane camp.I planned this program after RFO narrated a incident at Brahmagiri Wildlife sanctuary. When he was a RFO there, an Indian gaur became blind.As forest watchers noticed a gaur acting blind, they informed RFO. Forest team noticed bleeding near gaur's eye. Forest team then started monitoring the gaur, but in few days it died due to excessive bleeding. During the postmortem process, they noticed a glass piece pierced near eyes of gaur. RFO then analysed the incident and came to fallowing conclusion.

Most our trekkers knows Narimale forest rest house in Brahmagiri Wildlife Sanctuary near Irpu falls. As usual, this place is abused by visitors by throwing bottles and other wastes in open near rest house. Usually gaurs and many other animals rub their head against ground when theres is hitch in the forehead. This particular gaur would have tried to rub the head against ground where a piece of glass thrown. So this piece pierced in to forehead near eyes and due to excessive bleeding gaur died eventually. In Muppane too, we have considerable number of gaur, spotted deer etc., The bottles thrown around the place may cause such injuries to wildlife. so we decided to have clean up to begin along with.

We started talking about this program couple of months back, but due to various reasons it dragged to month of February. Finally we fixed it for Feb 28/march 1st weekend. When i shared details of this program with vishwas, a very enthusiastic nature lover and  fellow trekker, he said he would pitch in with his team too. We announced the program in our respective groups, Facebook and various other Social Media. response was overwhelming. Finally it was 25 trekkers group,hired 2 Tempo Travelers, started off on 27th Friday night.

Reached Muppane camp by 7:00 am, freshen up and had scrumptious brakfast prepared by our cook Ganga and co. It was Idli,masala vada with sambar n chutney. We decided to have a trek for that day. So we traveled to Kanoor and reached a local house. We dumped all our backpacks and started off trek towards veegi falls 1. It was strenuous trail while on descent to valley. Finally we reached veegi falls 1 and many had a shower. We spent about an hour in falls. then continued the trek to veegi falls 2 along with beautiful stream. It was very pleasant to trek along with stream. By the time we reached veegi 2, lunch was ready. All of us had lunch and trekked back to the local house. By the time we reached house, Ganga had prepared delicious Malnada kashaya with Mirchi bajji :). Plan was to stay back there, but We decided to get back to muppane camp after dinner. Dinner got ready quickly. By 9pm we had dinner and packed off by 10PM. We started journey towards muppane camp and reached by 11:30pm. Quickly pitched tents and retired for the day !.

Woke up next day, freshened up and had tea. We were not in mood to wait till breakfast gets ready. So we started brooming tent base areas. Entire area was littered by falling leaves and many plastic/paper pieces. It took about an hour to clean entire area. By then breakfast was ready. It was poori-sagu and Avalakki.
After Breakfast, we were not in mood to waste time. We made 2 sub groups, selected 2 different areas and started combing the area. In about 2 hours time we picked up 10 sacks of bottles, plastic waste, polythene bags etc.,
RFO had some unexpected commitment, so he got late. After the clean up job, all of us wanted to get in to backwater for a refreshing swim. Picked up life jackets, rushed to backwater. swam for 2 hours and came back. Lunch was ready, had food.

Though we planned to have interactive session with RFO, He surprised us by getting Mr.Imran patel along with him. Mr.Imran has vast knowledge on various wildlife issues. He has worked with Ullas karanth and now with Wildlife trade crime prevention society. Initially we thought of presentation, but later made it to be interactive session. I welcomed the guest. RFO begin the session with few of his experience in dealing with wildlife. then we handed over session to Mr.Imran patel.

Many interesting topics were discussed. Here  i am listing out them,

1) Reasons for Poaching wildlife: Many Chinese Medicines contain parts of wild animals, including those of endangered species. Whether endangered or not, poachers illegally kill wild animals in order to sell their valuable body parts to the industry. The industry is willing to pay substantial amounts to the poachers because of the baseless belief that certain animal parts have medicinal properties for humans.
2)Why only tiger conservation ? : There are very few people who understand the true importance of protecting the tiger. Most people feel it is only a matter of saving an animal that makes a beautiful sight to see. This reason only makes up a fraction of why we need to save this incredible animal. The tiger is at the top of the food chain in the jungles that it roams.The following is a very basic description of the chaos that would ensue if the tiger became extinct. If this was to happen, the populations of prey species like Spotted deer and Sambhar would burst at the seams. This excessive population would then totally ravage it's food source - vegetation. If the vegetation in the jungles was devastated, where and how would the insects survive. They may even shift to the crops in farmlands. If the plants in the jungles would be finished, what would refurbish the soil. If the soil was no longer fertile, new plants would not sprout. Over the years, this would probably mean the end of the jungles.
3)Type of forests we have and their characters
4)Issues affecting Sharavathi sanctuary
5)Tiger translocation and its problems
6)Tourism and conservation
7) many more.....

In total it was unexpected and fabulous session.It was wonderful platform to get clarified on myths, issues, problems on wildlife conservation.

Many thanks to wonderful group, RFO and Mr.Imran patel. We will cherish this program for lifetime.

You can check all the pics uploaded in fallowing links


Note: Next program will be trek from chanagar -- > Yaana -->Vibhuti falls -->Gokarna. Will send you more information later in the week.

We have scheduled Trekking , Nature Camp and water sports program on all weekends. If there is requirement other than weekend, we can organize too.
For more info,
Mail to prapancha@gmail.com
or
Refer to our Facebook Group Page

Talk to us for more information on actvities

Photos of Our Activities